A look at the effects of assimilation policies

The White Australia Policy was introduced in 1901, and was formerly known as the Immigration Restriction Act. The policy was designed to minimise the migration of all non-whites, predominantly non-European. However the Indigenous locals, who were considered a ‘dying race’, were also targeted. The policy was not abolished until approximately 70 years later.

While this policy was aimed at immigrants arriving from overseas and didn’t directly impact on Aboriginals, it highlights the sentiment toward non-white portions of the population. The belief that Indigenous locals were a ‘dying race’ lay the foundation for government policies such as the assimilation and removal of Aboriginal children from their families (Stolen Generations).

Non-whites were made to sit a dictation test, which could be given in any European language the administering officer chose. Essentially, the migrants were set up to fail. The National Museum of Australia noted that “the test was administered 1359 times prior to 1909, with only 52 people granted entry to Australia” [1].

It wasn’t until the 1940s, no doubt after the significant human loss Australia had experienced after the wars, that the Commonwealth realised the hindrance that the White Australia policy had on population growth. A number of steps gradually eroded the policy and by the 1970s it was completely eliminated with the introduction of policies like the Racial Discrimination Act 1975 [1]. 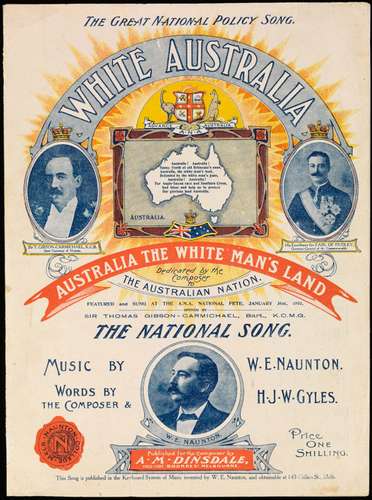